The only bone-eating bird in existence, the Lammergeier (or Lammergeyer, or Bearded vulture) is one of the rarest European raptors and was last known to breed in the Picos de Europa in the 1960's, since when it has been hunted to extinction. It is now listed by the Spanish Ministry for the Environment as in danger of extinction nationally.

the Lammergeier is identifiable by the diamond-shaped tail and pale head and underbody. Though naturally white, the last two features usually appear as a pale orange due to the bird's habit of rubbing itself with mud so acquiring the iron oxide pigments of the limestone habitat. Bones are dropped from a height onto rocks to expose the nutricious marrow, hence the Spanish name Quebrantahuesos, which translates as bone-breaker. Highly territorial, their reproductive rate is low with a long cycle of 180 days between egg-laying and fledging of the single young bird.

A ten-year conservation plan, the "Recuperación del Quebrantahuesos en los Picos de Europa", is underway to restore the Lammergeier to the Picos. Funded by the EU's LIFE project and headed by the Fundación para la Conservación del Quebrantahuesos (FCQ), the plan will be integrated with the conservation efforts of the Picos de Europa National Park to encourage these beautiful raptors back over from the Pyrenees. 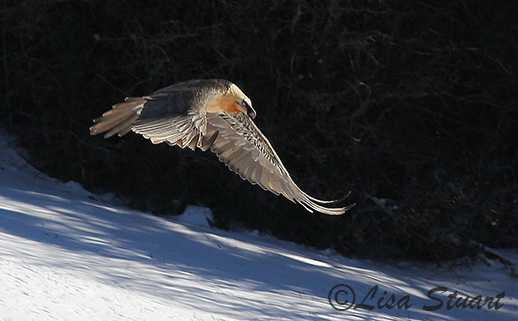 Stages of the project include establishment of nests with life-sized replicas of adult birds, insulation of electrical installations, creation of supplementary feeding stations, radio and satellite tracking and education. A study of the area has already been carried out, establishing the high probability for successful recolonisation of between 5-8 pairs. Young birds have already been translocated from the Pyrenees to the Picos de Europa.

A probable pair (because two adults of the same sex are believed not to tolerate each others' company for long, though a strange breeding system often consists of two males and one female) have been seen in the area since the autumn of 2005 and in June 2006 some of our guests had a Lammergeier fly close enough over them to be able to see it's "beard." All suggesting a positive outcome for the project as long as the threat of poisoning (laid to target other animal species) can be surmounted.

If you'd like to follow the progress of the Lammergeier reintroductions in the Picos, you can read the topic on Iberianature forum. And now available - the most up-to-date news on Lammergeiers and more on The Picos de Europa !

I was lucky enough to meet this stunning female bird 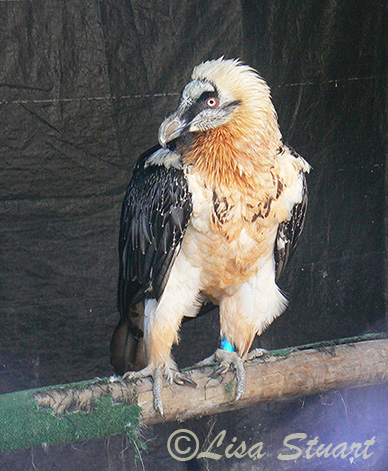 at very close (and a bit scary) quarters in the Botanical Zoo of Jerez, where she forms part of their Lammergeier breeding programme.