...for all the information on our guided ski touring and snowshoeing holidays in the Picos de Europa. Plus trip reports, weather forecasts, the Picos Blog and more.... 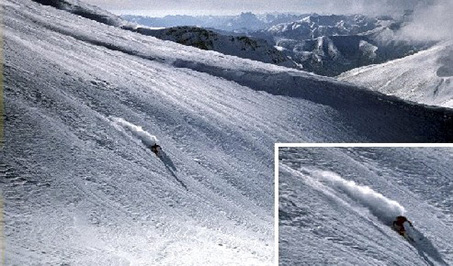 Mike enjoying the powder in the Cordillera. Foto Bustamante

The remarkably reliable snow base allows us to ski from Nov/Dec-April/May. 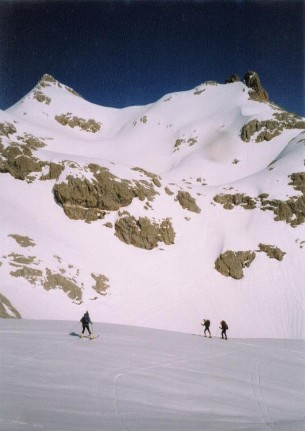 Weeks usually start on Saturdays but are flexible.Now approaching their 17th year, these holidays follow a varied programme. Using alpine or telemark skis (or snowboards) with skins & touring bindings we hope to climb a number of peaks over 2200m that can be descended by anyone with a strong Stem Christy technique. 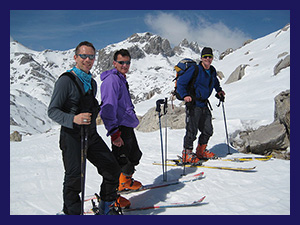 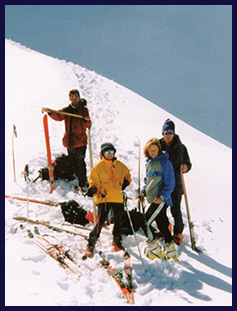 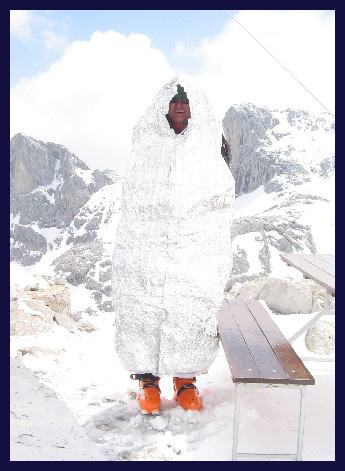 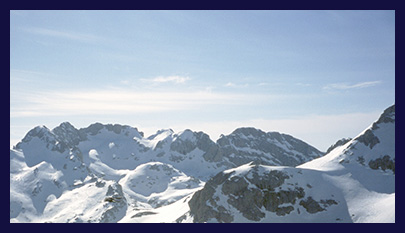 Mike, a qualified mountain leader, moved here in 1991, loves the area and knows it well.

Here's a nice video of ski touring in the Picos de Europa. 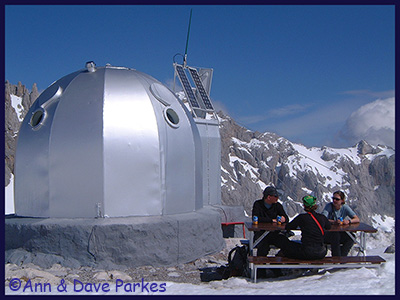 as backdrops we are well placed to access remote & little-visited areas. The use of our landrover can provide days with more downhill than uphill and the teleferico at Fuente De can whisk us up to 1834m in minutes. Up here in the heart of the Central Massif sits the Refugio Cabaña Veronica - a truly unique hut which, along with the larger Casetón de Ándara in the Eastern Massif, is often a base for our nights out. 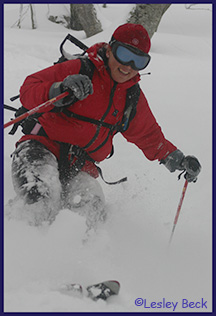 Beginners weeks can be arranged.

The price of €750 includes 6 days of guiding, accommodation with all food (including three course dinners at Casa Gustavo), use of available specialist equipment, and transport, all in a relaxed & friendly atmosphere.

Far from the clutter of ski-lift culture you are free to experience the beauty & solitude of this enchanting region where we guarantee there will be days when you see more wildlife than human. Your enjoyment is our primary concern.

And if you snowboard we can cater for that too. 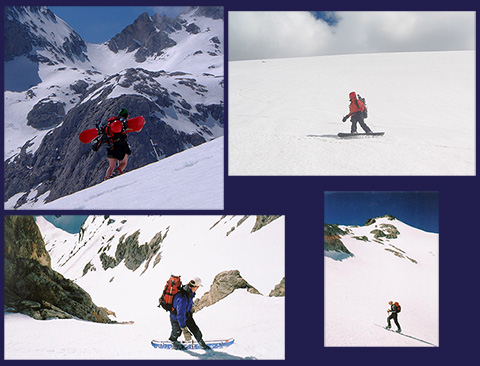 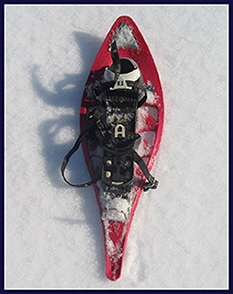 Come and explore Europe's little-known mountains on snowshoes - no experience necessary! Ideal for those who enjoy walking in the mountains but are thwarted by winter snow conditions, we offer guided weeks of snowshoeing that can be tailored to suit abilities. The weeks include 6 nights full-board accommodation with the option of nights out in refugios/huts if desired, guiding, transport and use of equipment (snowshoes and poles).€750 per person. Reductions on groups of 4 or more. 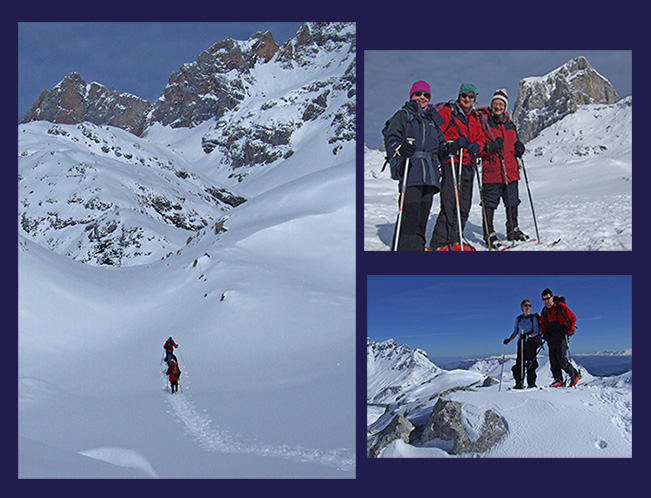 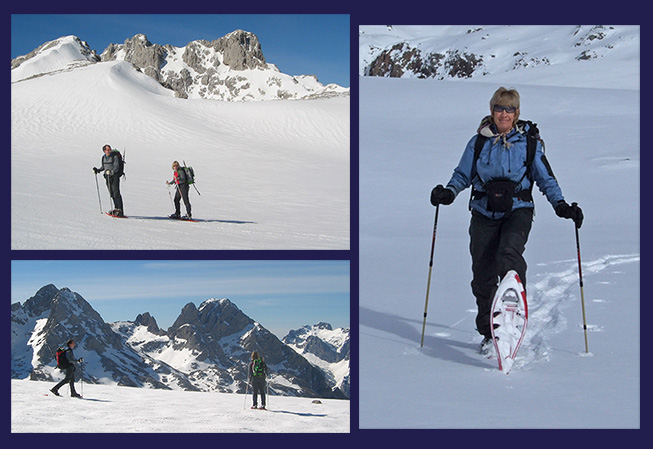 A recommendation from Rachel and Alan Parker (Shropshire, U.K.) who snowshoed with us in April '07. 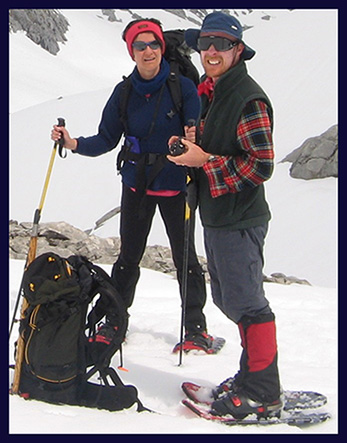 "Mike chose some great snowshoe routes for us and we were impressed by his judgment both of our ambitions and the level of fitness which we could apply to the excursions. The weather and snow conditions were almost ideal, but we have no doubt that the Picos and surrounding area offer a tremendous range of really good snowshoeing routes - we certainly intend to come back for more!.....All in all, our week with you was probably our best ever snowshoeing holiday and we enjoyed every minute. Coming back to a superb meal and very comfortable accommodation rounded off a first-class selection of routes through magnificent mountain scenery. We could not have asked for more."

We don't follow a set itinerary, every week tends to differ slightly, or radically, from the last. Great effort is taken to accommodate group and individual aspirations and to tailor programmes that are suitable to the prevailing conditions and the all-round abilities of the team. Following is a selection and description of routes that could amount to a fairly typical week of skiing with us. Most can be found on Adrados maps which can be bought online. 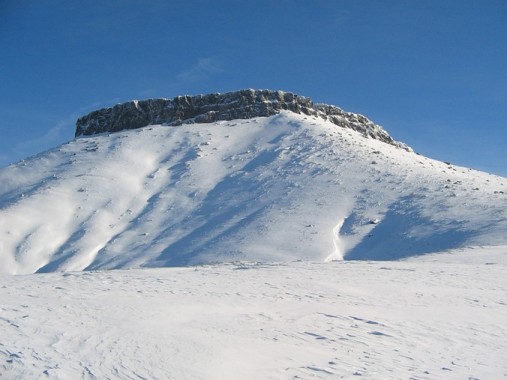 A circular route that takes us to the impressive table-topped summit of Peña Labra, great views of the coast to the north, the massive, sombre north faces of the Alto Carrión giants of Peña Prieta and Curavacas to the south and fantastic vistas of the Picos to the west. 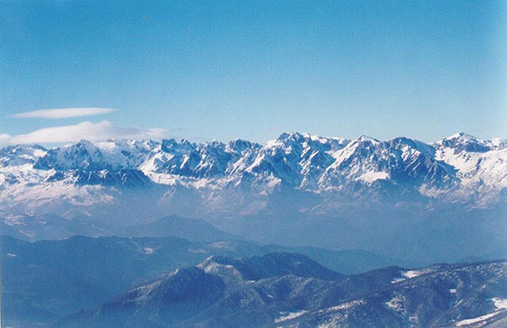 A steady 700m skin up the western edge of the south face can be broken at the top by a short crampon and carry of the skis (50m) to the true summit. The descent is at first down and across the gently angled (hanging) north-facing summit slopes. A gap in the fortress-like walls can be breached, giving access to the vast and gentle south-east slopes. 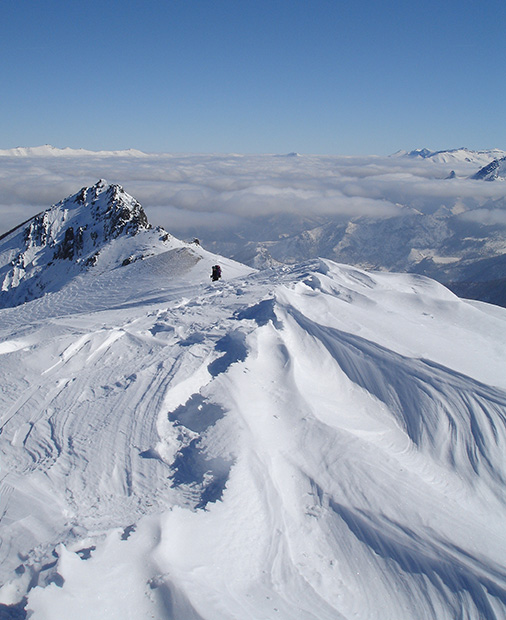 Perhaps the most popular linear ski tour in the Cordillera Cantábrica (on Sundays!) The route hugs the southern skyline of the upper Camaleño valley for most of the day and affords spectacular views of the Picos to the north, particularly of the Fuente De cirque.

The downhill is comprised of 2 descents, of approx. 500m each, down west-facing valleys, linked by a short 300m skin. 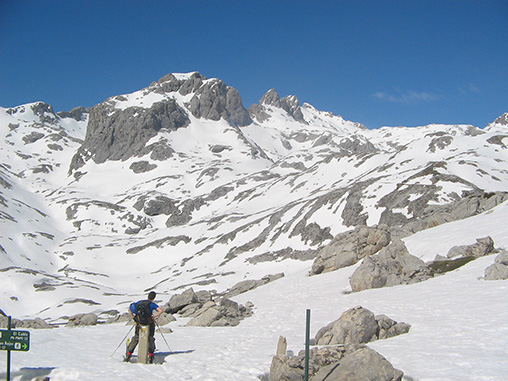 This is a long day, but those who make it are hugely rewarded by the sheer magnificence of this truly unique environment. It is possible to make a day trip to some of these surroundings, but the benefits of a night out far outweigh the extra pounds required in our rucksacks. 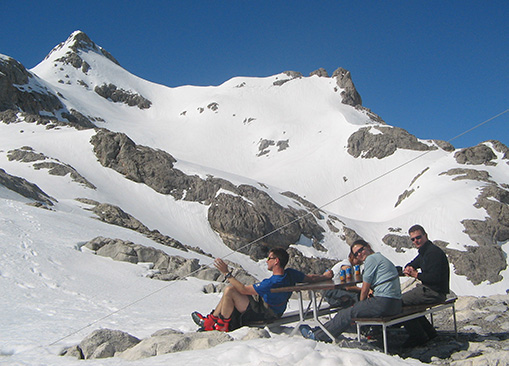 Some options from the Cabaña Veronica include;

A leisurely 2 hour return trip from the hut, this is by far our most frequented Central Massif peak. The short skin to the Collado de Horcados Rojos brings the first of many options;(a) stay put and admire the view,(b) put the crampons on,(c) carry on skinning up. 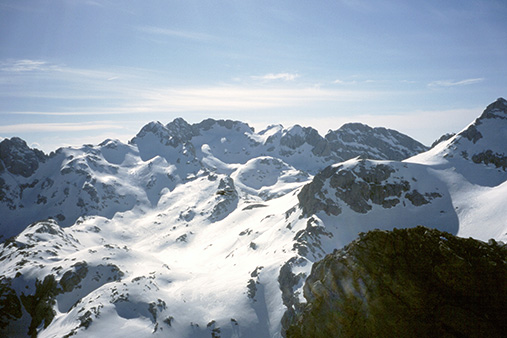 It's not possible for mere mortals to skin to the top so a decision on where to change styles has to be made at some point on the ever-steepening slope. Occasionally a gully does come into condition and a summit descent can be enjoyed (for the brave). 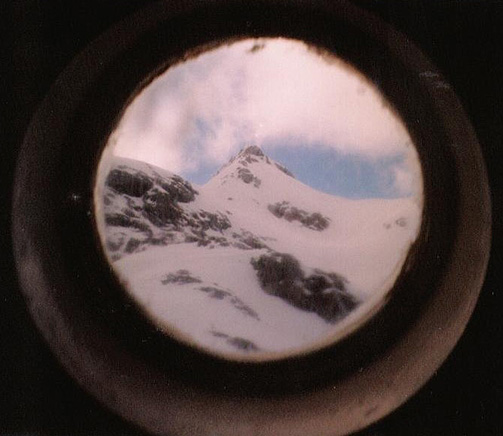 This superb pyramidal peak is recognised as possibly the best vantage point in the range. We normally leave our skis on a large flat shoulder on the north-east ridge and crampon to the summit. The ski to the bottom of the hoyo (crater/dolan/big hole) is, in places, steep and challenging. 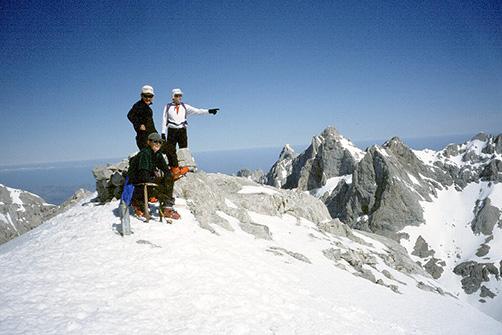 A short skin from the hut takes us to a point where we can ski to the bottom of the Hoyo de Senderos. A lofty perch on the north ridge can be gained after a sometimes tricky and technical ascent on skins. The col is a perfect depot for skis and a good spot for making a gear change for the summit bid. 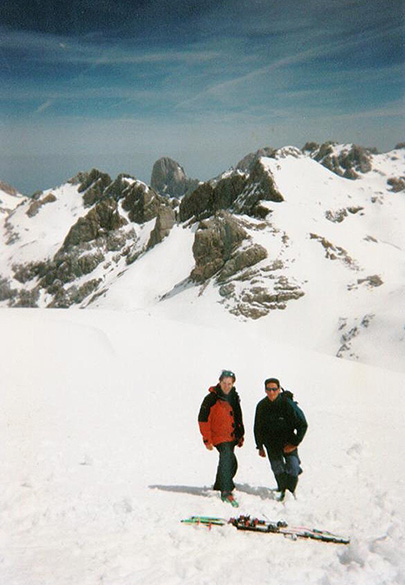 From the Collado de Hoyo de Senderos it's possible to slide onto the north-east slopes of Torre Llambrión, the second highest peak in the Picos. The final chimney to the summit is an option only for parties of competent winter climbers. A more favoured varient being the top of the north ridge, which gives more skiing. From here it's possible to ski with only a little shoving all the way to the bottom of the Hoyo Grande. 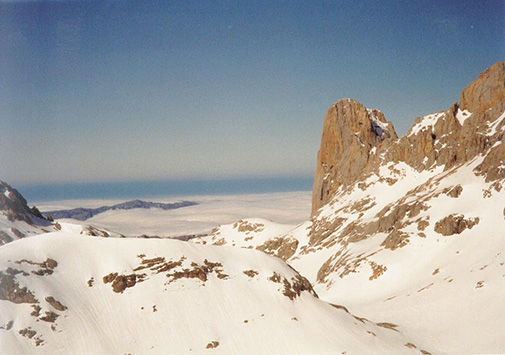 This large, 90+ bunk hut sits at the base of the Picu Urriello (or Naranjo de Bulnes), Spain's biggest mountain rock wall, and can be reached by either;(a) The Collado de Caín from the Hoyo Grande, with the possibility of taking in either Torre Blanca or Llambrión en route,(b) the Collado de Canalona with ascents of Peña Vieja or Pico de Santa Ana's west summit, then croosing the Collado de Santa Ana and into the Hoyo de Los Boches,(c) a very steep descent from the Collado de Horcados Rojos down the north face of Los Boches.All three routes end up at the bottom of the Hou Sin Tierra and require a short, steep skin/step up to the Garganta del Hou Sin Tierra before the last "relaxing" turns towards the refugio. 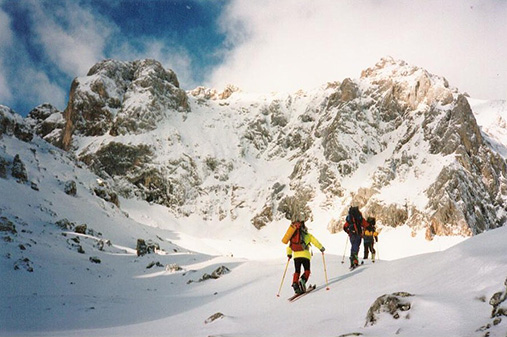 The return to Aliva can be made by either;(a) tracking back down the ascent route under the Collado de Canalona and on past the Vueltona,
(b) reaching the Vueltona via a steep descent into the Hoyo Sin Tierra,
(c) skiing through the Collado de Casares, from where two choices present themselves - a descent of the Hoyo de Oscuro and on down the Canal San Luís or a ski to the bottom of the Hoyo del Sedo from where a short 300m pull up lies the summit of Pico Padiorna.

All these options pass by, or close to, the Collado de Covarrobres - the gateway to the alpine pastures of Aliva which offer an amazing amount of different grades of skiing. It's possible, in certain conditions, to make the whole traverse of Aliva without making a single turn by following the cable car's service road. A more challenging descent can be made via the Valle de Valdecoro. 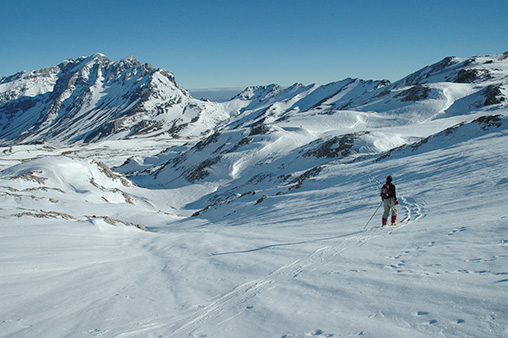 A descent to Sotres is also a possibility and can be reached either by passing the Urriello hut and descending to the Majadas de Terenosa or through Aliva. But, perhaps the best descent in the range (when conditions allow) is the Valle de las Monetas - skied from the Collado de Canalona - over 1,500m of descent. 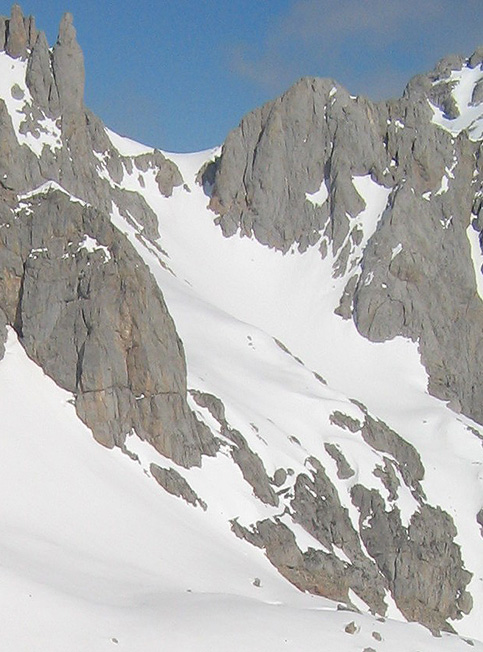 The Ándara hut in the eastern massif of the Picos can be easily approached from Sotres to the north-west and the village of Bejes in the east. The eastern approach often requires landrover support at least as far as the Fuente de Los Lobos. The long gradual skin terminates on the Collado Tresmacondiú, where a sharp descent of nearly 200m is needed to arrive at the hut. 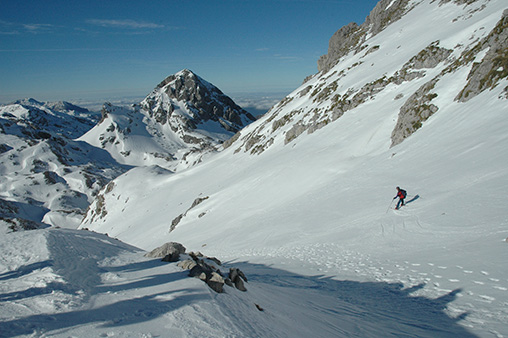 Among the numerous objectives and discoveries to be made from the hut are;

(a) point 2,214m just to the north of Pico Valdomingüero and most of the subsidiary peaks along the ridge that borders the north-west side of the Eastern Massif. (It is sometimes possible to ski to Sotres),

(b) La Rasa de La Inogotable can be climbed via the Castillo del Grajal, with the option of skiing the Canal de Arredondas,

(c) the peaks of Po del Sagrado Corazón and Pico Samelár can both be summited on skis - a popular choice of descent being the Canal de San Carlos. 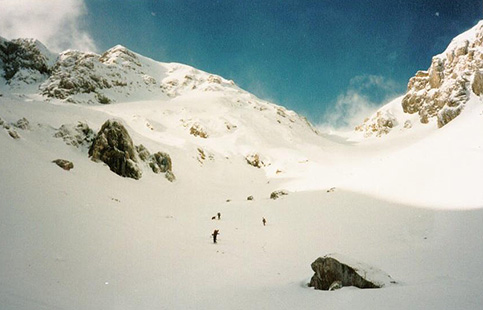 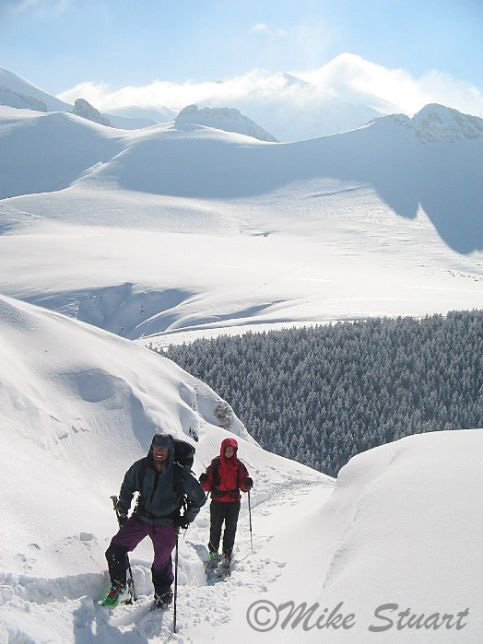 Please visit Picos Rock and Snow for all our news and to enquire.